Early in the 1550s, King Gustav Vasa ordered the building of a Palace on a small island in the fast-flowing Kolbäck River. Much of that Palace was demolished at the end of the 1660s.

Strömsholm at that time was part of the appanage of the Queen Dowager, Hedvig Eleonora, and it was on her orders that the old Palace was pulled down and a new Palace began to be built.

Here as at Drottningholm, the Queen Dowager collabora-ted with the architect Nikodemus Tessin the Elder.

Strömsholm Palace consists of a massive central building framed by four square towers. A dominant central tower with a large, dome-like cap, rises on the park side.

To this there were added in Hedvig Eleonora's day about 20 buildings within the Palace perimeter for servants, supplies etc., and work began on laying out the grounds in French Baroque style.

The Palace was mainly completed as Tessin had intended, but work on the interiors came to a standstill.

The architect Carl Hårleman completed the chapel in 1741. The chapel organ, built by the organ builder Daniel Stråhle in 1743, has been preserved in its original state.

In 1766 the heir to the Swedish throne, Gustav - the future Gustav III - married Princess Sofia Magdalena of Denmark and the Riksdag (parliament) presented her with Strömsholm as a wedding present.

Extensive work on the interiors began the following year, under the direction of the architect Carl F. Adelcrantz.

Today the Princess's bedchamber is an outstanding example of Swedish interior design at the beginning of the neo-classical epoch.

Another very interesting feature is the Chinese dining room, the fabric-covered walls of which are decorated with Chinese-style paintings by the well-known tapestry painter Lars Bolander.

Strömsholm was never a permanent royal residence. Instead it became a sort of pied-à-terre. It was ideal for overnight stays on journeys to the south of Sweden.

This was a very important concern in the Caroline period, and between 1868 and 1968 Strömsholm was the home of the Swedish Army Riding School. The old officers' mess from that period has recently been reinstated.

Today Strömsholm is once again a hippological centre, in-cluding a specialised school for promising young riders. 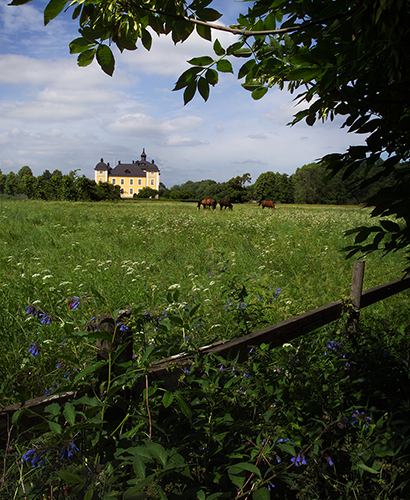 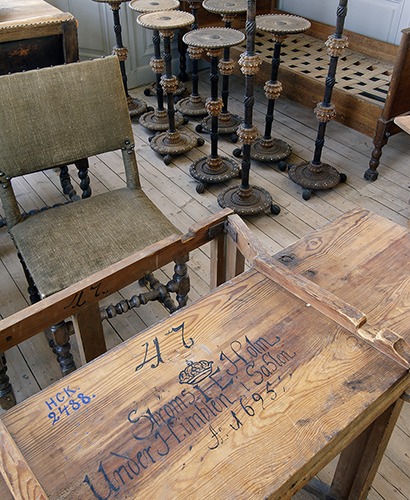 Furniture from the Caroline Strömsholm Palace is stored in a tower room. Items were taken from such storehouses as required. Photo: Dick Norberg/Royalpalaces.se 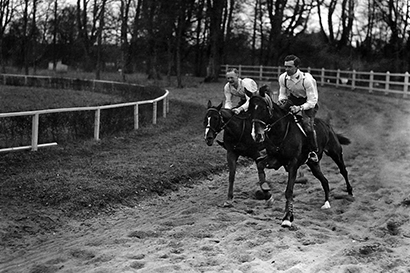 The King's father, Heir Apparent Gustaf Adolf, studied the 'long course' at the Swedish Army's riding and driving school in 1928-29. Here, he can be seen training on the sand course before the race on Österängen with his horse Clan-Robert. Photo: Strömsholm

Strömsholm Palace is open for pre-booked tours year round, and can be given in English or Swedish. For groups with specific interests, to...

Much of the décor at Strömsholm Palace is in the Gustavian style. It was created for King Gustav III's wife, Queen Sofia Magdalena, who w...

Here, King Gustav Vasa raised horses for the Swedish Army. Today, there is a riding college and annual equestrian competitions are held i...

At the top of the palace is Carl Hårleman's unique chapel, decorated in the 1730s for Queen Ulrika Eleonora the Younger.

The Strömsholm Palace Café is situated in a building designed by Carl Hårleman in 1731 that originally housed the palace's kitchen.

Early in the 1550s, King Gustav Vasa ordered the building of a Palace on a small island in the fast-flowing Kolbäck River. Much of tha...

Summer programme at the Royal palaces

We are delighted to be reopening all the Royal sites for the 2022 summer season. Discover ten Royal palaces, with their museums, chapels,...

Read more
Information due to the pandemic

At a young age, Karl XI received around twenty horses as a gift from the royal families in Spain and France. He then commissioned portrai...